Tradition of the Metalurgical Production in Frýdlant n.O.

The current production of castings follows a long-term tradition of iron works in Frýdlant n.O. Their foundation dates back to 1618. In the period of its foundation it was the production of pig iron which was prevailing, however, the production was improved and extended in a course of time. An increasing demand for iron structures resulted into a foundation of Vítkovické železárny (The Vítkovice Iron Works) in 1832 - a subsidiary governed by the Frýdlant Iron Works.

An important point in the development is presented by building up two cupola furnaces in 1852, changing the orientation to the mass production of cast iron goods, especially cast iron stoves, which were supplied by Frýdlant to houses throughout Europe.

In 1900, another blast furnace was stopped, ceasing completely the metalurgical primary production of iron in Frýdlant. Due to a high demand for the cast iron goods, especially for stoves, introduction of moulding machines was needed.

In 1913 the Frýdlant joint-stock company for production of iron goods - FERRUM was found, renting the Frýdlantské železárny for a period of 50 years, thus ending a period of the archbishop ownership of the enterprise.

The enterprise came back to the name of FERRUM again in 1990, following its independence gaining from a national company titled Ostroj Opava.

Because of business reasons the transition of the name was realized on 22.6.2000 and the company will exist with a name of GIFF a.s.

Nowadays GIFF a.s. is a self-employed production unit. It produces approx. 1000 tons of castings per month. The castings are produced in various weight categories (0,1 - 100 kg), dimensions (up to 700 mm) and materials ČSN 422415,422420, 422425 (GG15, GG20 and GG25) and ductile iron  GGG 50. The production of the moulds is provided on the modern moulding line HSP-3D with the moulding frame 850x850x200 mm operating through the process of  blowing by compressed air  thanks to SEIATSU valves with the following press-finishing as well as a new built frameless moulding line FBO 4. It means frameless process  of mould production with the dimensions 700x600x180-250 mm. The moulding goes off into syntethic bentonite mixture.

The foundry equipment comprises the sand facilities, core plant, two middle frequence induction furnaces INDUCTOTHERM with the capacity of 6 tonns and two middle frequence induction furnaces EGES, with capacity of 6 tonns, final castings treatment (blasting, grinding, painting, packaging), modern centre  the complete machining of castings including measurement, dispatch.  There is also technical production development in the foundry, which is able to make through the latest methods a technological process according to the delivered technical drawing, as well as according to the delivered casting.

The foundry comprises also a moulding section producing all kinds of modell facilities made from classic materials (wood, metal, resin) both for the company needs and for external customers. Nowadays we machine the castings and modell equipment on our own CNC machining centres. 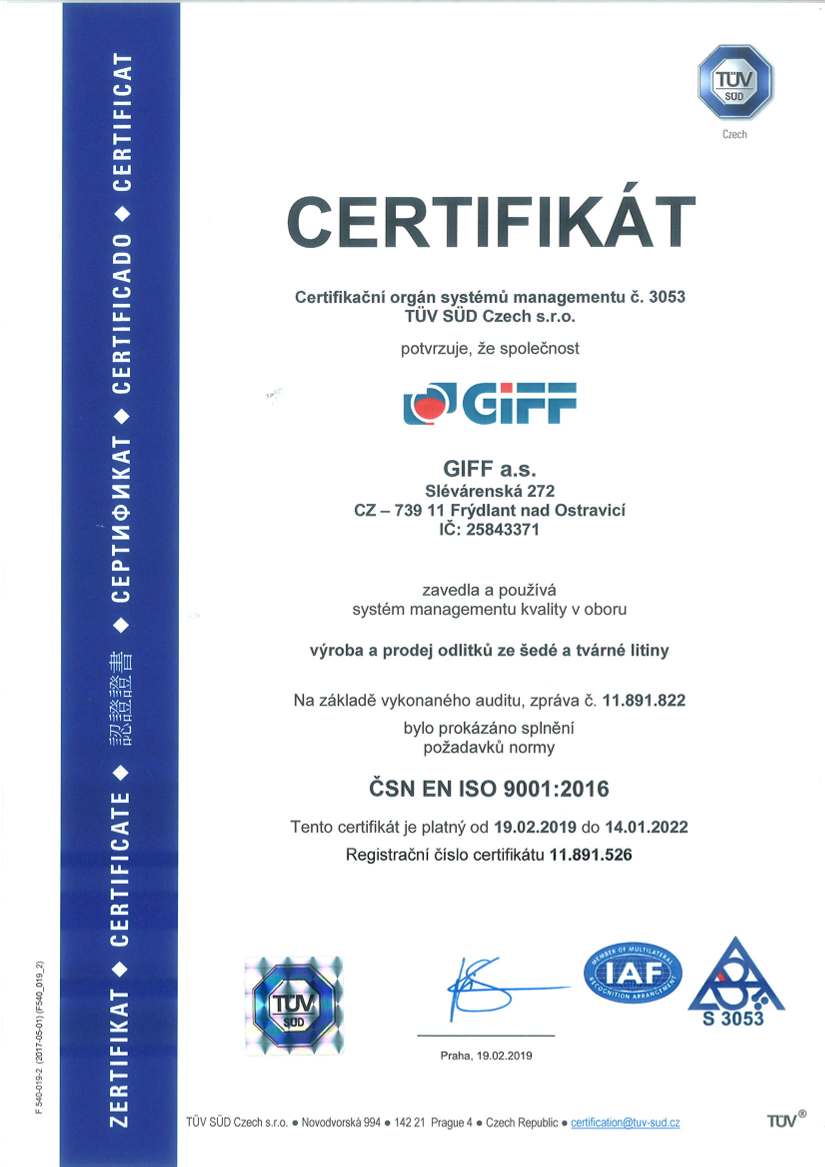 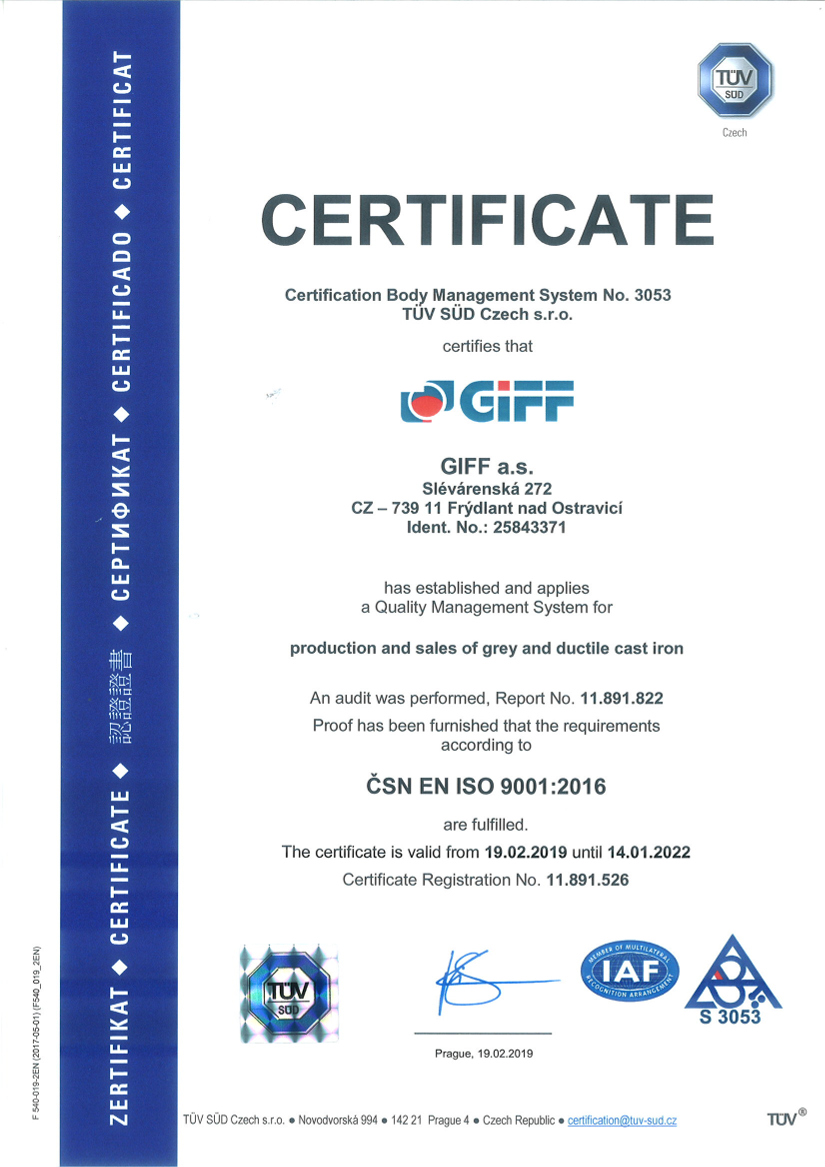 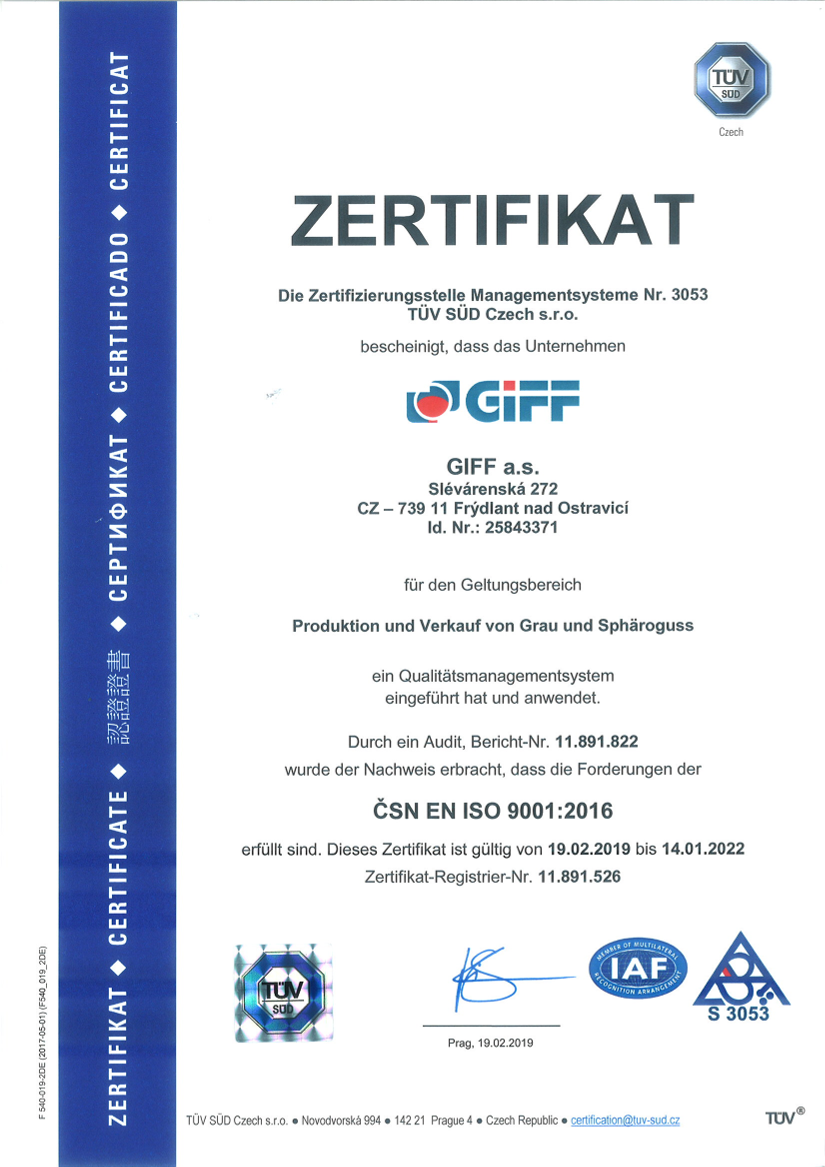